How many of you guys listen to audiobooks?

It seems to be a rising trend and I can definitely see the allure. Recently, I listened to a few books and it was this amazing hands-free opportunity. I’m not saying I want to leave the paper/print world for full-blown audio, but I’m definitely planning to incorporate more audiobooks onto my TBR list 😊

Today I have some audiobook news, an audiobook GIVEAWAY, and some novella sales – so I wanted to take the opportunity to share the news with you guys!

My #britallachian romance, Just the Way You Are, is coming to Amazon on AUDIOBOOK in April!!! YAYAYAYAYAYAY!!!! Narrator Catherine Gaffney took on the daunting task of trying to get all of the personalities and accents together in this funny culture clash between Britain and Appalachia. If you like lighthearted romcoms (except with an inspirational thread), this story has it! And there’s a fun historical subplot along with it too.

Then, if you LIKE it…you’ll be pleased to know that one of the most adorable introvert-heroes on the planet is in book #2 😊

The second novel in the Mitchell’s Crossroads series, Charming the Troublemaker, is OUT ON AUDIO!!!! YAY!!!! Now you can ‘hear’ all about #adorkableAlex and Rainey while doing other things like…washing dishes, driving, walking your dog, etc. Cool, huh?

So today I’m giving away THREE copies of the audiobook of Charming the Troublemaker. All you have to do is answer this question in the comments below: When you think of the word ‘home’ what comes to mind? Your existing house? A different place? Heaven?

Apart from Heaven, 😊  I get this general idea of my childhood surrounded by the Blue Ridge Mountains, but I also have my kids all around me. Sounds weird, but my family and these mountains make up ‘home’ for me, wherever that may be. We’ve physically moved so many times, it’s hard for me to think of a physical ‘house’ as home at this time in my life.

But what about you? Where is home? What makes you think of home?

SNEAK PEEK at a little of Charming the Troublemaker? This excerpt is from one of my favorite scenes in the book!! #underoos

The interior of the car was dark behind the tinted windows, but she could make out Alex’s silhouette, so she tapped on the window.  With a pregnant pause, the window began to descend enough to see Alex’s signature grin.

“Hey Alex, are you ok…” Her eyes widened as the lowering window revealed his bare shoulders and chest. “What?” The window glass graciously stopped lowering as she realized Alex’s computer bag probably blocked a lot more than his belly button. “What on earth…?”

His grin brightened, too much. “It’s a funny story actually.” 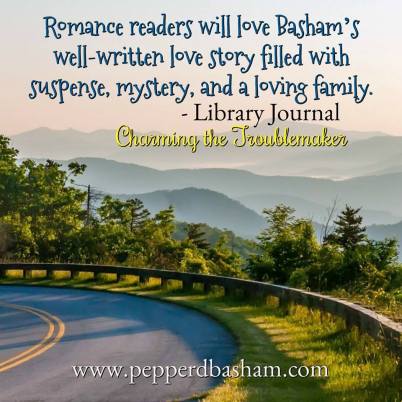 She blinked, still trying to get her thoughts to congeal into words. From her standing position, even in the fading light, she caught a clear glimpse of a broad chest and muscular arms. Her brain just couldn’t figure any excuse in the world about why Alex Murdock would be sitting on the side of this country road in nothing but his underoos.

“I ran off the road and dropped by phone.”

She studied him, trying to find the logical connection between dropping his phone and dropping his drawers. “Which automatically meant you stripped down to your skivvies in forty degree weather on the side of the road?”

He laughed. Laughed. Which immediately caused a responsive crash of two thoughts in her head. One, she wanted to chuckle too – at the sheer ridiculousness of the entire scene. In fact, a tickle waited for release in her throat as she wrestled with thought number two – Alex Murdock was crazy.

But she did like his laugh. And his boyish smile. Which might mean she was the crazy one.

“My cell flew out the window.”

“Your cell flew out the window?” Yep, he was crazy.

She tilted her head, playing along with the crazy. “Did the fairies take it?” 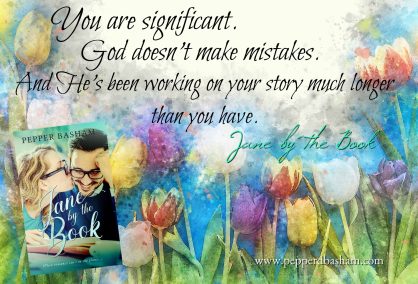 My two Jane Austen-inspired e-novellas are on SALE!!!

Today through the 30th, Second Impression is FREE and Jane by the Book is only 99¢!!!

Leave your answer to the question below and be entered to win one of three copies of Charming the Troublemaker on audio!! Woohooo!!!!

And don’t forget to stop by and get your copies of Second Impressions and Jane by the Book!!