This week I’m celebrating one of my favorite contemporary romance novels. An “oldie” but a goodie, this book was published in 2005, and oh la la, I was introduced to the story and the author in 2007.

Why is that important?

Well, as a budding romance writer, I’d had a hard time finding books that really fit the mix of depth and fun I was going for, and when I stumbled across Siri Mitchell’s novel, Kissing Adrien, it was a match made of fictional proportions. 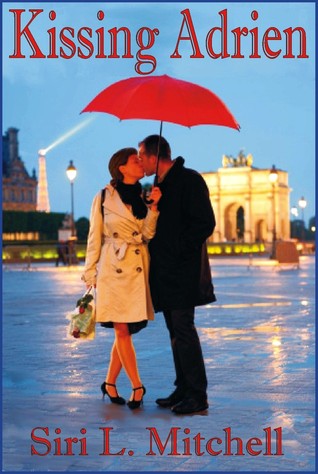 So, of course, I then purchased every book by her I could find. I’d also discovered Mary Connealy around the same time and felt pretty sure I’d struck gold! Two authors who combined faith, fun, and romance into well-written stories? Wowzah!

Now, let’s get to the Book Journey for today.

Kissing Adrien is a novel of self-discovery with romance sprinkled in. In the current flare of Katherine Reay, Siri Mitchell’s novel is about a young woman who’s allowed her creativity to dull beneath real-life expectations and has lost her dreams along the way. The story introduces a hero who is quite delightful in his own right. We’ll swoon over him lots more on the upcoming Swoony Saturday post, but for today…we’re talking setting.

Now, of course, there are a gazillion things to see in Paris, so we’re only going to chat about 5 and the #1 on the list is NOT the Eiffel Tower. GASP! Located on the River Sienne, the grand and gothic cathedral, Notre Dame rises into the cityscape with its memorable western façade, spires, and flying buttresses. Completion of the cathedral occurred in the 12th century and the building has been both a setting and character in many books, most notably the Hunchback of Notre Dame by Victor Hugo. For trivia’s sake, the largest bell in Notre Dame, and the one you’ll hear tolled on the hour, is named Emmanuel and weighs 13 tons. Here is a video you can watch to HEAR the bell toll for yourself!

Next on our tour list is…nope, not the Eiffel Tower! I know, I know! What about the most iconic building in Paris? Well, let’s take a side trip first to one of the most culturally exquisite buildings in Paris. The Louvre.

Hailed as being one of the best art museums in the world, the Louvre opened its treasure-trove doors in the late 1700s and features art from all over the world. With paintings, sculptures, and mummies, this former royal residence houses a truly breathtaking display.

Next is the most visible symbol in The City of Love. The Eiffel Tower. Ready for this? It was originally designed as a temporary structure for the 1889 World’s Fair. So, #1 it wasn’t supposed to be featured on the streets of Paris forever and #2 it’s not sooooo old. Another interesting historical tidbit, Gustav Eiffel (creator of the famed tower), designed it with a true scientist’s brain. He ran experiments off the tower related to transmissions – and because of the tower’s height, it became a strategic communication tower during WWI to not only transmit Allied info, but to intercept messages from the enemies. If you’re more into the city-life scene with a wonderfully historic-bent, another great place to visit is The Marais. Similar to Manhattan’s West Village, except with a French twist, The Marais is filled with trendy shopping, restaurants, hotels, and pastry shops, yet the setting is pre-Napoleonic France. Cobblestone streets and elegant whitewashed buildings bring a bit of small town (though quite liberal in philosophy) feel in the center of a thriving city.

Alright, last one (although there are many more I could list). I chose this one for me because I WANT to see it someday and I love historic houses…or in this case…um…palaces.

The Château de Versailles is the former residence of King Louis XIV and XV. A conglomeration of architectural extravagance and dazzling beauty, the palace boasts The Royal Opera House, the Royal Chapel, and the most visited fixture – The Hall of Mirrors. There are also extended gardens to explore and a wonderful history to uncover, so what’s not to love?

Now, if we add a very romantic guy named Adrien to the list of things to see in Paris, then this Book Journey sounds like a dream-come-true. Learn more about Adrien Delaporte on Saturday in Swoony Saturdays.

So….if you could visit Paris, what would you most look forward to seeing?