A few more sites of Pemberley

Chatsworth Hall, or the Palace of the Peaks as it is called, is the home of the Duke and Duchess of Devonshire. In the most recent movie called The Duchess, Kiera Knightley plays the Duchess Georgiana, who actually lived (at times) in Chatsworth…among other homes.
One of my favorite pictures – and one that shows the differences in the American vs British culture is this one: 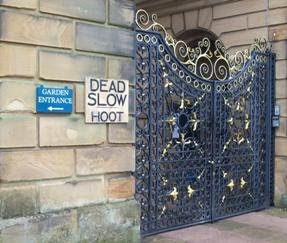 Check out the sign. Isn’t that great. “Dead Slow hoot”. In Appalachia-America, we’d say “Slow down and honk.” 🙂
Another fantastic shot, which shows the grandeur of the home is this: 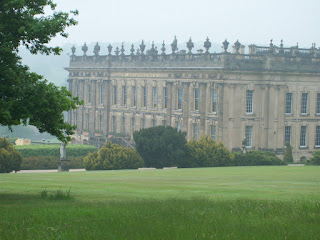 It truly was amazing to see – rising out of the fog, as it was. Below is a closer view of the front of the house, and if you’re familiar with the 2005 version of Pride and Prejudice, this is where the last scene of the movie takes place with Mr. and Mrs. Darcy. 🙂 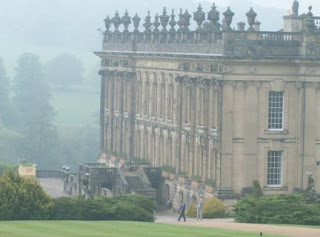