Last week we visited London from the viewpoint of my character, Eisley Barrett, who is on a genealogical mystery hunt in England. You can check that post out here.

Today, we’re going to journey to Eisley’s next stop – Derbyshire and the ‘inspiration’ for Lornegrave in my novel, Just the Way You Are. 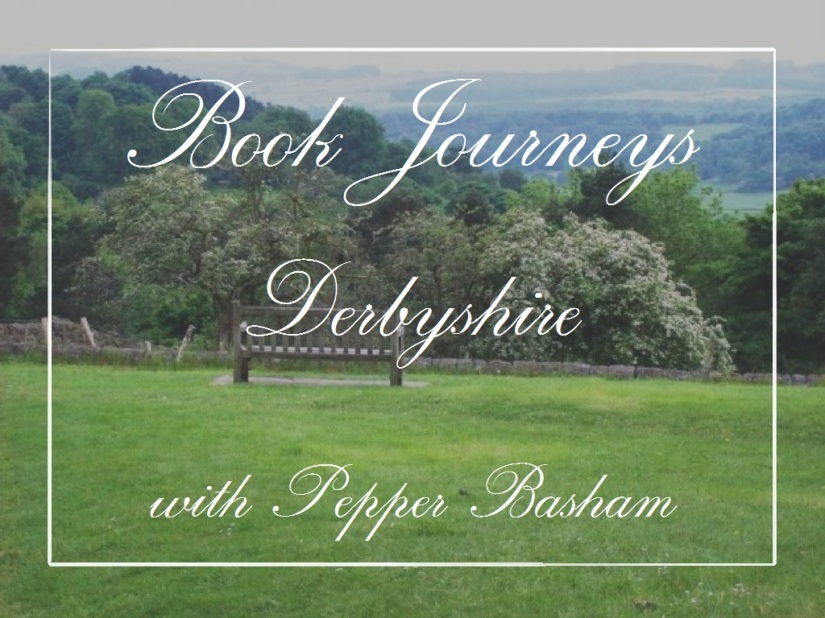 Derbyshire (pronounced Darbisure) is a county in the ‘middle’ of England which also houses a large part of the beautiful Peak District (if that sounds familiar you may have read/heard about it in Jane Austen’s Pride & Prejudice). I particularly enjoyed the Peak District because the mountain range there (Penines) have a similar geography to many parts of the Blue Ridge 😊 Except, Derbyshire had cliffs (think Lizzie Bennet standing one with her dress billowing around her) AND cooler looking houses.

Some of the lovely sites in Derbyshire are Bakewell (for the famous Bakewell Tarts), Kedleston Hall, Hathersage (where Charlotte Bronte was inspired to write Jane Eyre….and where Little John is buried 😉 Matlock, Chatsworth House (which will be in a later post) AND….my inspiration for my manor house in Just the Way You Are – Haddon Hall. 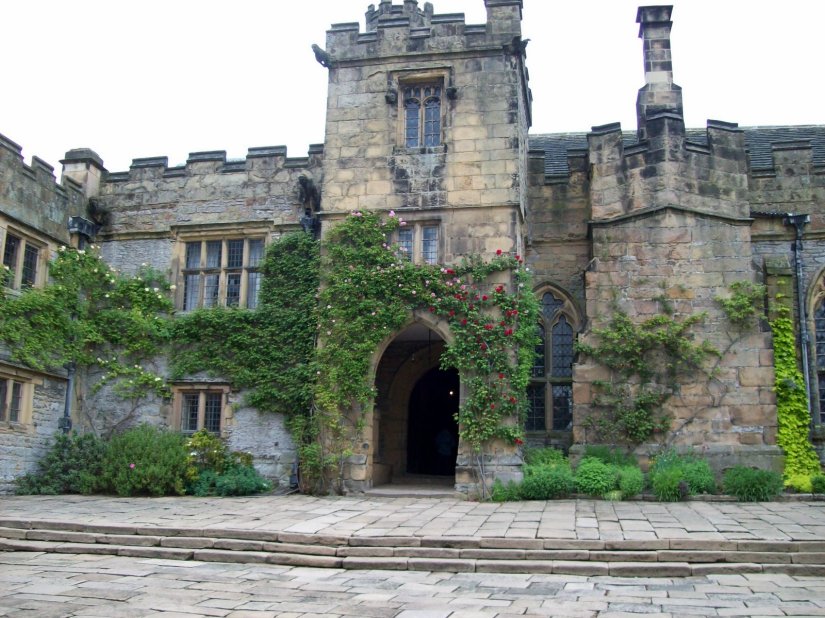 Oh my, Haddon Hall is a wonderful, out-of-the-way visit in which you feel as though you’ve really stepped back in time. This 12th century house has been used in all sorts of movies like… The Princess Bride, various versions of Jane Eyre, the most recent version of Northanger Abbey, and The Other Boleyn Girl – to name a few. You can learn more about Haddon and those movies here.

In Just the Way You Are, Lornegrave (for which Haddon is the model) is the ancestral home to Eisley’s family mystery – so she gets to do some sleuthing in top-notch fashion in a home that holds as much mystery as any novel. The beauty of the woodwork, the windows, the gardens, all set the stage for a wonderful world of creativity and imagination.

So….when Eisley (my heroine) gets a chance to walk the stone stairs and sneak through subterranean passageways, this is the type of place to create atmosphere 😊 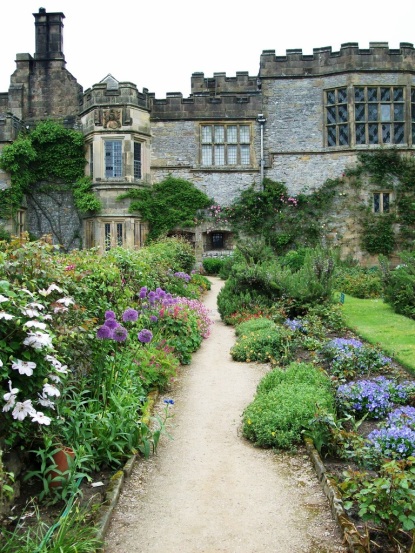 To give you a sneak peek into one scene in Just the Way You Are, I’ll let you follow along in some of the sleuthing. (She’s accompanied by her English “guide” Lizzie…who kind of looks like Helen Mirren 😊 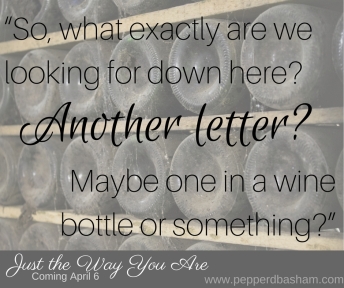 Eisley shuddered. “So, what exactly are we looking for down here? Another letter? Maybe one in a wine bottle or something?”

Lizzie’s finger danced in the air, counting each shelf as she passed. “Ten, as I thought.” She stepped around the final shelf and slid a hand over the wall behind it. Eisley followed, but the flashlight’s golden glow revealed only the dimpled wall.

“Nothing.” The pinch of disappointment curbed Lizzie’s tone. “I’m not sure what I expected to find, but at least something.”

Eisley scanned the row of shelves and replayed the words from the letter. Take my wine at half past ten. Half past ten?

She counted back five. “Lizzie, what if it was a twist on the phrase? Maybe half of ten?”

Eisley’s beam sliced like a spotlight down the wall over the previous five shelves, the sound of her breath a whisper in the silence, her hope even smaller. Another crazy delusion of hers? What was she thinking? Her beam smoothed passed a dip in the wall and she stopped. “Lizzie?” Eisley brought the light back to the indention, her breath dropping out altogether. “Lizzie!”

“I see it, Luv.” Lizzie came to her side and directed the flashlight’s rays between the shelves. 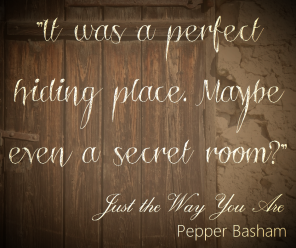 A wooden slab door, perhaps three feet tall, wedged in the shadows, tucked in an unusual curve of the wall. The old door’s faded brown slabs matched the wall color so well it was easily overlooked, especially without the convenience of electricity, and the angle at which the door fit into the wall obscured it from view. It was a perfect hiding place. Maybe even a secret room?

Lizzie moved first, squeezing between the shelves to the wall. “This most certainly isn’t on the blueprints.” She crept along the wall until she touched the ringed handle of the door. “A subterranean passageway, I’ll wager.”

Lizzie shoved at the latch. It didn’t budge. She took her flashlight and beat against the metal handle until it moved. “We shall see, shan’t we? Come, give us a hand.”

Eisley rushed forward and pressed against the door. With a clank loud enough to rattle the wine bottles, the door lurched open, sending a screech into the shadows surrounding them.

Rachel is a stay at home mom who LOVES to read. She enjoys good (clean) books of all kinds. However, she has a soft spot for historical fiction. There is something magical that can only be found between the covers a book and her desire is to share that piece of magic with you. Rachel has been reviewing books since 2014 and is the sole owner/operator of Bookworm Mama. And she simply adores being immersed in the bookish world. Her husband and 2 beautiful children are her life and joy. Among the 500 things she does a day, she still finds the time to read. Rachel was selected as a Judge for the INSPY Awards 2017 as well as The Christy Awards 2017. Rachel currently works for Pepper D. Basham as her Virtual Assistant. View all posts by BookwormMama14