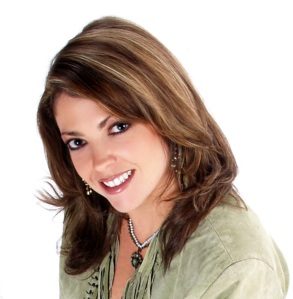 Well, if you want some first encounters with sizzle, today’s guest will provide you with some. Not only that, but one lucky commenter will win her newest book, a novella entitled The Snowflake.

Jamie Carie is an award winning author who writes romantic tension with as much passion as she writes adventure. If you want a book that doesn’t make you tense from shoulder to shoes, or grab you from page one and hold you to the end, then  DO

NOT pick up one of her books. Seriously.

But…if you want adventure, intense romantic tension, and constant peril – she’s the type of author for you. I LOVE her books. It’s kind of like Indiana Jones in print, but with a lot more romance 🙂  She’s quickly becoming a good friend too. You can learn more about Jamie and her books at her website – www.jamiecarie.com

So Jamie, what makes for a good first encounter?

For me, I love it when the hero and/or heroine is slammed with the impact of the other person. This could be an instant attraction or something deeper, like that feeling that they’ve just met their other half. In Love’s First Light, Christophé feels a mysterious, almost supernatural connection with Scarlett which leaves his already delicate emotional balance teetering on the edge of rational behavior ( i.e. he becomes somewhat of a bumbling, mad scientist in her presence). Here’s an excerpt of their first encounter. 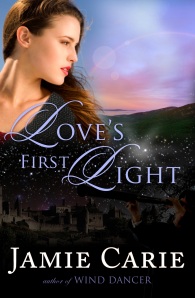 Woohoo! You picked my favorite of your books to use as an excerpt, Jamie. Oh my, it’s soooo good.

The mist rose above the circle of the earth. The air was crisp, deadly quiet as it always was in the old graveyard at dawn. Christophé St. Laurent grasped his dark cloak against his chest with one fist, the other holding a knurled walking stick. He didn’t need it to walk—only to swirl the mist when the mood suited him.

His gaze tripped over the headstones as he passed. Robert Barret, born 1732, died 1765. A small stone. A short life, his. Madame Genevieve Montaigne rested on the laurels of goodwife to ten children, and yet not a plant or flower graced that simple edifice. And then there was Captain Fontaine, with a headstone so tall, the etching so old and proud, the moss so thick—a hero in some long-ago history lesson. Christophé’s lips grew taut as he contemplated the ghostly eulogies.

A small yellow glow started on the horizon. He stopped his morning walk, stilling the clip of his heels to turn eastward and watch the second-by-second display of a planet’s rotation. It never failed to fill him with wonder and he found himself taking a deep breath, feeling the mist move into his mouth and throat and chest.

It was turning pink.

Joy rose from his chest to his throat. “Thy kingdom come,” he whispered into the fading mist. “Thy will be done.”

He turned, his pace brisk now, knowing the way like a child knows the path home. Energy flowed from the earth, through Newton’s gravity, to rise up from his legs and cause a sweat to break between the sharp planes of his shoulders. His legs pumped faster as a sense of power rushed through him.

The thought struck him as new. He hadn’t allowed himself that freedom in so long. An image flashed across his memory—he and his brothers and sister running through an ornate garden . . . a palatial dream. He saw their bright faces in stark relief. The light was too bright. Something in him wanted to shield it away, but he couldn’t. Every blink brought a remembered face. His brother, Louis, with hair so dark and eyes that flashed back a challenge at him. Jean Paul, a year older than Christophé, quiet and solemn, quick and encouraging, quick as moonlight, but willing to forfeit the race to see any one of them smile.

Then he saw Émilie. She reached her hand out toward his, her shorter legs unable to keep up. She was as bright as the braids that had tumbled loose, bouncing upon her shoulders.

Christophé blinked hard several times but could not rid himself of the image of her face, so alight with laughter and . . . life.

“Thy will be done,” he choked through sudden tears.

He stopped, realizing he’d been running. He bent over his legs, felt his long hair fall forward like a dark curtain, heard his grievous cry—waves of sound that made no difference. He lifted his head and watched as tears dropped in liquid pools, scattering the dust on the stone path into tiny puffs.

It was like that sometimes. A sudden memory swept away all but this core of grief. No matter how he fought, it knew his weakness. It sought him out in the sane moments when his mind wasn’t obsessed with the physics of light and color and the complexities of a mathematic scheme that shouldn’t work but, somehow, always did. When his mind was a silent crypt it crept in, an insidious rotting, a ruin, and then simply . . . overwhelmed him.

With nothing short of grace, he pulled himself up and together, took a bracing breath, and continued on this morning-ritual walk of blurted-out prayers and nonsensical thought. It was the only thing that kept the thread holding his mind and soul from snapping.

He turned another way. It was frightening, this varying from routine, but this morning he found himself running. This morning, he found he could do anything.

He moved smoothly, his legs and feet pushing against the stone path, up a slow rise, his breathing soft and even. He ran with the cool wind blowing back his hair, the remains of the dead flashing by like glowing stones. He ran and felt he could keep running forever.

He saw her and stopped. She was crouched low, her head down, her shoulders curled within her, stiff and unmoving. He couldn’t help but stare at her long, unbound hair. It was dark but alive with color, the pink glow of a morning’s glory reflecting in each strand.

Gold and amber and bronze and the color of glowing coals. Bright, white light. He saw the prism in his laboratory. Blinked and saw the split of white into the colors of the rainbow. Saw them reflected on his old castle’s walls. Brilliant but cold. So brilliant.

He wanted to tell her of it. His chest heaved with the effort not to blurt it out.

She stood suddenly and whirled around—long, dark cape and glorious hair, flowers still clutched in her hand. Christophé’s gaze dropped from her frightened face to her rounded stomach and then the gravestone that glared chalk-white in the mist behind her.

“Color,” he thought as he stood transfixed. No, not a thought.

Heaven help him, he had said it aloud.

Scarlett stared at the tall man on the path before her, hoping he wasn’t everything he looked to be. Murderer. Maligner of women everywhere. Dark and dangerous stranger. Everything her mother had warned her might happen on these early morning visits to a husband’s grave suddenly rose up as real. She clutched her cloak to her throat, wishing, for once, she had listened to reason and put on something besides her nightgown before leaving the house.

“Stay back,” she heard herself whisper and then wished she’d stayed silent. She backed away, slowly, one step after another. The lilies in her hand dropped to the sharp green earth. She turned to run and then heard his deep voice.

She turned her head back toward him and stared. No one had asked her that question. What right did he have to ask it? What right to make her feel afresh the guilt in that answer? She turned fully toward him, felt the flare of her anger and her cape.

“Comment est-il mort?” His eyes were dark and hooded. “How did he die?” He murmured again, this time in English.

She tilted her head into one shoulder and closed her eyes. “For the Révolution. In Paris.”

When she opened her eyes . . . she saw nothing but the mist.

Color, indeed. Bright and beguiling – just like the story. Thanks so much for sharing this, Jamie, and what a wonderful opportunity to introduce people to your writing.

And don’t forget to leave a comment for your chance to win Jamie’s novella.

Like Christophe in Jamie’s novel, Love’s First Light, may we marvel in the Creator of so great a creation.

Up Next – Author, Kaye Dacus