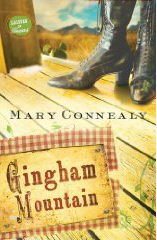 Prepare to be lassoed into a wagonload full of love, laughter, kids and a couple of shocking kisses. Gingham Mountain is another exciting and hilarious addition to Mary Connealy’s Lassoed in Texas series….and like most fun-filled stories it begins with misunderstandings.
Hannah Cartwright must save her little sister from the clutches of the evil Grant Cooper – the rancher who takes in helpless orphans as hired labor on his farm. Unfortunately, to rescue her sister, she has to find a reason for staying in town, so she becomes the new school teacher. In the process, she’s shocked to discover that the villainous Mr. Cooper may be less like her horrible father and more like her handsome prince.
Grant Cooper just wants to get on with his life and enjoy the blessings of being a single dad to a large and eclectic crew of children. The last thing he needs is a bossy and nosy school teacher interfering with his kids and his life….even if she’s intelligent, pretty, and great with children.
Misunderstandings spiral out of control while a scheming seamstress tries to find a way to take Grant’s farm and his heart. Will a few shocking kisses, two giving hearts, and eight children equal the perfect ending?
My two cents worth:
Read it! Anything by Mary Conneally has been a delight and Gingham Mountain is no exception. Her clever way of bringing the male/female banter onto the page is exciting and realistic, not to mention hilarious. Grant Cooper is one of those ‘real men’ who has a heart as big as Texas. He’s incredibly innocent and manly all wrapped up into one…and the unexpected kisses shocked and delighted me as much as it did the characters.
If your after a book to make you smile, warm your heart, and take you to another time and place, I recommend any of the books from the Lassoed in Texas series. You’ll have a smile on your face and suddenly wish your husband owned a stetson 🙂

Mary’s writing journey is similar to a lot of others. Boil it down to persistence, oh, go ahead and call it stubbornness. She just kept typing away. She think the reason she did it was because she was more or less a dunce around people—prone to sit silently when she really ought to speak up(or far worse, speak up when she ought to sit silently). So, Mary had all these things, she want to say, in her head; the perfect zinger to the rude cashier, which you think of an hour after you’ve left the store, the perfect bit of wisdom when someone needs help, which doesn’t occur to you until they solve their problems themselves, the perfect guilt trip for the kids, which you don’t say because you’re not an idiot. She keep all this wit to herself, much to the relief of all who know her, and then wrote all her great ideas into books. It’s therapeutic if nothing else, and more affordable than a psychiatrist. So then a very nice, oh so nice publishing company like Barbour Heartsong comes along and says, “Hey, we’ll pay you money for this 45,000 word therapy session.” That’s as sweet as it gets.Mary’s journey to publication is the same as everyone’s except for a few geniuses out there who make it hard for all of us. And even they probably have an Ode to Roast Beef or two in their past.There are two other books in this Lassoed In Texas Series: Petticoat Ranch and Calico Canyon