If you haven’t seen The Lego Batman Movie, it’s certainly a movie worth your time. It’s so funny and gives all sorts of nostalgic/clever hints back to Batman movies from days-gone-by.

All of your Batman favorites come out to play – Joker, Harley Quinn, Alfred, Robin, Barbara Gordon and even Tom Cruise…. oh wait, he’s not a usual feature in Batman…but yep, he shows up.

Along with the typical silliness and humor that Lego movies have brought in the past, this one also adds an important storyline. The main story problem – well, Batman tells Joker within the first few minutes.

Batman works alone. He doesn’t ‘need’ anyone His focus and identity is in the fact that he can make it on his own, doesn’t have to share the glory of his successes, but more than any of those things, he doesn’t have to become vulnerable.

Throughout the movie, we get to watch circumstances force Batman into being…gasp…introspective. He begins to see (and fight against) the value of building relationships with a variety of people, including his comical nemesis, the Joker. 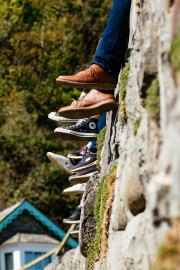 Living in community with others makes his life complete.

Relationships are important in making Batman a better…Batman.

The Bible is a beautiful story of relationship.

He totally does ‘ships’ – so much so, that he pursues people who are as indifferent to him as Batman is to little Robin in the movie.

Yet, because of God’s love, the relationship that once was irrevocably severed has been restored through the faithfulness and obedience of Jesus Christ.

The only way for true relationship is in Christ.

Now may the God of peace who brought up our Lord Jesus from the dead, that great Shepherd of the sheep, through the blood of the everlasting covenant, make you complete in every good work to do His will, working in you what is well pleasing in His sight, through Jesus Christ, to whom be glory forever and ever. Amen   Hebrews 13:20-21

Rachel is a stay at home mom who LOVES to read. She enjoys good (clean) books of all kinds. However, she has a soft spot for historical fiction. There is something magical that can only be found between the covers a book and her desire is to share that piece of magic with you. Rachel has been reviewing books since 2014 and is the sole owner/operator of Bookworm Mama. And she simply adores being immersed in the bookish world. Her husband and 2 beautiful children are her life and joy. Among the 500 things she does a day, she still finds the time to read. Rachel was selected as a Judge for the INSPY Awards 2017 as well as The Christy Awards 2017. Rachel currently works for Pepper D. Basham as her Virtual Assistant. View all posts by BookwormMama14

4 thoughts on “God and “Ships” in Lego Batman”