A Note Yet Unsung by Tamera Alexander

A Note Yet Unsung by Tamera Alexander is a duet between two hearts who are trying to make their dreams come true. Rebekah Carrington watches the world of music from behind the curtain of social norms. A talented musician who has studied for years in Vienna, Rebekah isn’t allowed to perform on stage due to society’s rule against women performing. Refusing to allow the curtain to drop on her dream, Rebekah seeks an audience with the new maestro of Nashville’s symphony orchestra, Nathaniel Tate Whitcomb. Despite his compassion in her plight, the young maestro cannot break convention and offer this woman a seat in his all-male orchestra. Though their relationship begins with discord, as they work together to complete Tate’s symphony, despite his recurring headaches and dizziness, a friendship blossoms into something much deeper.

But neither Rebekah or Tate are completely what they seem. Secrets from their pasts keep a hold on their futures and they must work in harmony to have a chance for both of their dreams to come true.

Tamera Alexander’s beautiful writing and heart-touching ability to draw upon the characters’ distinct differences to complement each other is masterfully done. What should we expect from a master storyteller, though? As a mountain girl, I was particularly delighted in the way Tamera described Appalachian people in a positive light, without sugar coating reality. The tenderness and fierce love of family shines through in these scenes, which were my FAVORITE scenes…and I’m totally biased 😊

Sweet romance, intelligent dialogue, and a gentle note of inspiration, bring this story together to leave a sweet melody lingering in your heart.

As a FUN extra, you can find the playlist for this book on Tamera’s website. Click the photo below to check it out!

You can find A Note Yet Unsung at:
Amazon
Barnes & Noble
Christian Book Distributors 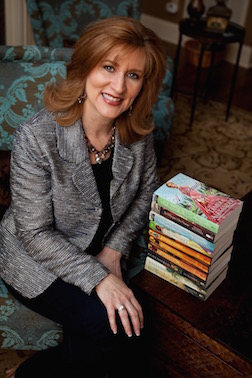 Tamera Alexander is a USA Today bestselling novelist and one of today’s most beloved authors of Christian historical romance. Her works have been awarded and nominated for numerous industry-leading honors, among them the Christy Award, the RITA Award, the Carol Award, Library Journal’s top honors, and have earned the distinction of Publisher’s Weekly Starred Reviews. Her deeply drawn characters and thought-provoking plots have earned her devoted readers worldwide.

Tamera and her husband reside in Nashville, Tennessee, where they live a short distance from Nashville’s Belmont Mansion and Belle Meade Plantation , the setting of Tamera’s #1 CBA bestselling Southern series. Her upcoming series, the Carnton Novels , launches in fall 2017 with Christmas at Carnton  (October 3, 2017), a Christmas story, which is set at Franklin, Tennessee’s historic Carnton Plantation.