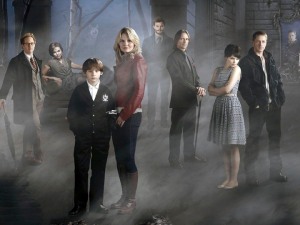 Okay – so I’m a sucker for fairytales. Just ask my mom. Growing up I practically lived in a little fairytale world. Gee, as an aspiring author, I kind of kept that mentality into adulthood. 🙂

So when the season finale of Once Upon a Time came on last night, I had to fight 5 kids (and the animated adventures of Spiderman) to get to see bits and pieces of it.

I’m not a diehard fan. It’s a fun way to pass the time – but as I watched last episode something popped to mind.

In last week’s episode we find out that August is Pinocchio. (MUCH cuter than the Disney version, btw), and he tries to convince Emma (the savior) about the curse of Storybrooke. I usually don’t put a lot of spiritual depth to these sort of things, but August makes a statement that I thought was interesting…and deeply spiritual.

Emma doesn’t believe August when he tell her about the magic of Storybrooke and the curse of the whole town. She doesn’t believe even when he SHOWS her that his body is turning back to wood.  When Henry (the little boy- and Emma’s son) confronts him, August says,

“She didn’t believe because she doesn’t want to believe.”

That statement struck me as SOOOOOO Biblical, and was just a reminder of why C.S. Lewis, George MacDonald, and J.R.R. Tolkien used the venue of fantasy to teach Biblical truths.

Because they don’t want to. Their minds and hearts are blinded by the ‘but what about’s

I’m not saying that Once Upon a Time meant to show any Christian theme at all. It certainly portrays good vs evil and love conquering all (even death), but as a Christian, I thought it was interesting to see that simple connection.

What was one of your favorite fantasy-novels which shows spiritual truths?

The Lion, The Witch, and The Wardrobe is probably one of the most known.

The Princess and the Goblin? or Lilith?

The Lord of the Rings?