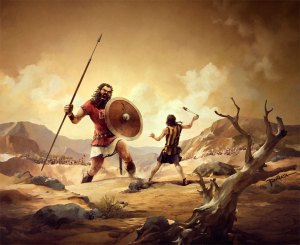 Needless to say, the Bible is a fount of deeper truth. There is a story on the surface, but a treasure of meaning hidden just beneath. It’s probably old hat to you guys, but a wonderful discovery to me. Each detail in the stories of the Bible are vital, even the ‘seemingly uninportant’ ones. In fact those are the ones that usually point to the ‘heart’ of the story.

For example: Shepherd boy defeats giant with a slingshot and a smooth stone.

But underneath, as with the entire theme of the Bible, the ‘heart’ of the story is “God’s ultimate power to rescue His people” (and he usually uses the most unlikely heroes – but we’ll save that point for another day 🙂

So, the next story let’s focus on in the Gospel of John, is Jesus’ first miracle.

Here are the verses:

1 On the third day a wedding took place at Cana in Galilee. Jesus’ mother was there, 2 and Jesus and his disciples had also been invited to the wedding. 3 When the wine was gone, Jesus’ mother said to him, “They have no more wine.” 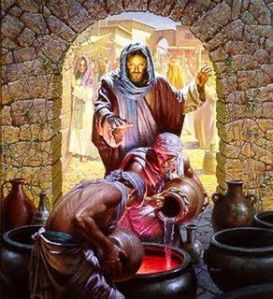 5 His mother said to the servants, “Do whatever he tells you.”

6 Nearby stood six stone water jars, the kind used by the Jews for ceremonial washing, each holding from twenty to thirty gallons.[b]

7 Jesus said to the servants, “Fill the jars with water”; so they filled them to the brim.

8 Then he told them, “Now draw some out and take it to the master of the banquet.”

They did so, 9 and the master of the banquet tasted the water that had been turned into wine. He did not realize where it had come from, though the servants who had drawn the water knew. Then he called the bridegroom aside 10 and said, “Everyone brings out the choice wine first and then the cheaper wine after the guests have had too much to drink; but you have saved the best till now.”

11 What Jesus did here in Cana of Galilee was the first of the signs through which he revealed his glory; and his disciples believed in him.

On the surface, this is a wonderful introduction to Jesus’ power. His miraculous abilities to go beyond the natural and do something supernatural.

In a sense, this first miracle is the introduction to why Jesus came into the world. What the Jews had used for centuries, the ritual washing, still hadn’t made them clean. Though they may clean their bodies, who would clean their hearts?

And that’s what happens to each of our hearts when Christ gets involved. 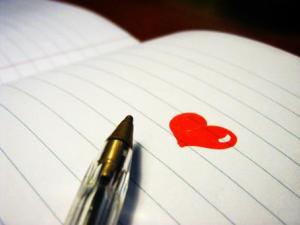 How does this apply to our writing?

Does your story have a ‘heart’? Does it carry wealth beyond the black and white print? Every story has a purpose. What’s yours? Because the ‘purpose’ threads through your book so that there are glimpses of a deeper truth. Every good story has one (or more than one).

The purpose is usually in your pitch or maybe even on the back cover of your novel.

It’s the driving force of the novel.

As Christ is the driving force of your heart.

Pepper Basham writes Blue Ridge romances sprinkled with grace and humor. She is a regular contributor of Christian Fiction Online Magazine and blogger at The Writer's Alley. A mom of five, speech-language pathologist, crazy-hat wearer, and lover of chocolate, you can find her chatting about life or giving book reviews on her personal blog, Words Seasoned with Salt. Pepper is represented by the classy and prolific Rachel McMillan of the William K Jensen Literary Agency View all posts by pepperbasham

2 thoughts on “More Than Meets The Eye”