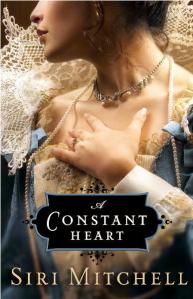 In October 2008, I enjoyed one of my first Siri Mitchell historical romances. A Constant Heart.

Having loved her contemporary novels, I wondered if I’d like the genre switch. I wasn’t disappointed. Here is my review of her novel, A Constant Heart.

Under the watchful and paranoid eyes of Queen Elizabeth, where adoration is rewarded with influence and honor gained through tickling her Majesty’s fancy, the balance of life & death, wealth and ruin hangs by a precarious thread.

Simon, Earl of Lytham, knew the steps to his royal dance. His fidelity to his queen promised him a life with purpose, so marriage to a simple knight’s daughter offered no distraction, only the certainty of financial gain. His role as a courtier to the queen overshadowed his painful memories of his first wife’s betrayal, kept his status secure, and gave him opportunities to advance himself into the world of privilege.

Marget knew her place, her purpose. She would marry the Earl of Lytham as her father decreed, but unlike any hopeless resignation, she determined to bring her indifferent husband honor. Uncertain of the rules at court, Marget stumbles upon Queen Elizabeth’s disdain and sinks into deeper emotional debt to her husband, until an unlikely and unsettling alliance with Lady de Winter begins to improve Marget’s station.
Against his will, Simon softens under Marget’s genuine attempts to help him. The scars from his first marriage freeze his resolve against Marget’s love, but with each act of selflessness Marget displays Simon’s heart thaws – and finally seizes the beautiful, uncontaminated affection she offers. Her devotion, sincerity, honesty, and gentleness shine a light on the pretension, deception, and base rules of life at court.
But as their love deepens, the charade they play as emotionless courtiers by day and devoted lovers by night braids together until Queen Elizabeth feels the loss and threatens, not only their marriage, but their lives.

Is love worth the risk, the gamble, the loss? Can love truly conquer all or will the deception and desire for power break ‘a constant heart’?

It isn’t often that fiction unveils romance within a marriage relationship. Usually, the entire ‘male catch female’ – or visa versa, is the tone of the novel, but in Siri Mitchell’s novel A Constant Heart, the entire book opens up the lives of a married couple, who learn to love each other. The story was beautiful, tastefully and colorfully written, gripping, funny, and incredibly tender. I enjoyed the continual switch of points of view, from Marget’s thoughts to Simon’s thoughts. The most painful instances involved her miscarriages, but my favorite scene combined a dinner party with lots of radishes (for fear of spoiling the book for others, I will not give more details). Siri Mitchell transported me back in time, weaving historical facts seamlessly through the tale. I will read it again….soon.

1 thought on “A Constant Heart”